Thinking of joining Korean Cupid?  Well, that’s a GREAT idea.  This Koreancupid review will give you all of the tips you need before you sign up.  I’ve been living in Asia for around 10 years and I thoroughly enjoy Korea.  I don’t choose to live their full time because it’s a bit expensive but it’s a great country and the girls…well, the girls are AMAZING.  Most Korean Cupid reviews are done by people that don’t live there and don’t understand the culture.  These people are just out for the money of selling you something related to Korea.  I know first-hand what it’s like and actually spent 7 months there.  If you’ve heard enough or you were really just looking for Korean Cupid, then go ahead and click through below for the best deal.

Here’s the thing about dating sites in Asia.  You’re an idiot if you don’t sign up for them.  Seriously.  Signing up for any dating site here is like shooting fish in a barrel instead of trying to catch them with bait.  You can sign up for free and the girls actually message you first.  It’s mind boggling.  There’s one thing about Korea though, there aren’t quite as many girls that are into foreigners as there are in some of the other countries.  The reason for this is because their

economy is a little better.  In other countries, the girls see you as an easy ticket to an easy life.  Here, while there are still some girls like that, they will need to at least like you a little bit before they’ll commit to having sex with you.  Don’t let that stop you since there are still thousands of girls on these sites looking specifically for foreigners.  That’s why we suggest the dating sites.  Korean Cupid makes is extremely easy to find the girls that do want foreigners.  Signup before you go there and ‘pipeline’ as the young guys like to call it.  You can have 10 dates set up before you even arrive!  This is a huge advantage. 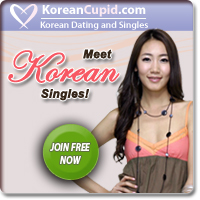 Something I’ve done is signup to 3 dating sites in different countries all at the same time (read the other reviews first before you do this and use my links to get special deals).  Then, you pick which country has the most potential for you based on what the girls look like that messaged you first and take your holiday there.  What a time to be alive!

Quality of Girls on KoreanCupid

Top notch.  This place comes in second in looks in my opinion to only Indonesia.  Of course, looks are subjective so I’m not going to comment on that anymore.  They are HOT though (sorry, had to).  These girls are super sweet and this country is a bit westernized compared to most of the others.  The girls on Korean Cupid are all going to be sweet to you because they are looking for someone exactly like you.  These girls never have an age preference so it’s amazing.  Where else in the world besides Asia can you get a 23-year-old girl that wants to actually date you and settle down with you?  These girls will cook and clean and satisfy every one of your ‘needs’ until you need nothing else.  This is the way they were raised.  Be loyal to them and they will do anything you want.  Or you can setup an open relationship with a lot of them and ‘sponsor them for very cheap and they will act like your girlfriend anytime you want.  This includes every benefit of a relationship but without having to be loyal and you have multiple girls like this.  Variety truly is amazing!  The quality of these girls is 8 out of 10.

KoreanCupid Scams? How are the Members?

This is the least scammy dating site in all of Asia in my opinion.  I never had a problem with it at all when I was there and no one has reported anything to me yet.  I think the reason for this is that it’s a developed country and there aren’t as many poor people.  None of the Cupid Media dating sites are really scammy, though.  There’s a general rule for this: the poorer the country, the more scammers.  KoreanCupid does a great job keeping this clean though so there’s no need to worry.  Every once in a while, you’ll run across a ladyboy or someone that’s OBVIOUSLY trying to scam you.  Use common sense and you’ll be just fine.

Is it Free?  How Much Does it Cost?

It’s free to sign up.  You can also chat with some of the paid members for free if they message you first but most of the girls don’t do that.  I’d recommend signing up for your free account and checking out the girls.  If you like them, then you’d be crazy not to sign up.  Get the platinum package.  Even though it’s more expensive you have the best chance of finding a girl and you have a tremendous amount of messages you can send.  There’s another catch to this, though.  If you don’t get the paid version, all of the girls will think you’re poor and no one wants to date a poor guy in Asia.  It’s the best investment you can make in your sex-life to sign up.  I guarantee that.  I’ve gotten 50 plus girls using these websites and all for free!  Well, I had to pay the small amount of money to sign up to message the girls non-stop but it’s insane how easy it is if you’re just nice to them.

If you’re into Korean girls, then there’s no way you don’t also like Japanese girls.  Check out our JapaneseCupid Reviews.

Warning, they’re a bit crazy.  But seriously, just pick the country that you want to go to and sign up.