It’s very easy to give this IndonesianCupid review.  There is virtually no competition at all for this site anywhere in the country.  Rather you’re visiting Jakarta or Bali (the main two places expats and tourist go), my friends and I have had major success using this site in these areas.  Just like the rest of our reviews here at AsianSexpats it’s quite obvious that we recommend online dating.  Online dating is tremendously easier in Asian countries because the girls prefer western people which pretty much includes most foreigners.  We still have a bit of the exotic appeal for them just the same as they have that appeal to us.

This site is trusted and well respected because it’s owned by Cupid Media.  They do a great job across the board with most of their sites and generally have a decent amount of members.  Indonesian Cupid is no different.  We’ll go ahead and jump right into the review here.

Religious Influence on Dating in Indonesia

We have to ahead and just get this out there off the bat.  The country is predominately Muslim.  This seems like it would be an issue but a majority of the country is non practicing or it has little influence on their lives and decisions.  At the end of the day they’ll still tell you that they’re religious but they definitely will make decisions outside of their religious beliefs.  Don’t let this stop you from coming out to this wonderful country. 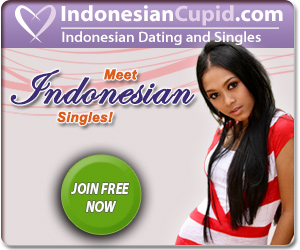 These girls have real sex appeal.  Everyone of us here agrees that these girls are much curvier than your average Asian country.  There are some real stunners on this site and the average is quite high.  It’s sort of a hidden gem and one of my favorite countries when it comes to the looks department.  I’d much prefer to take a few weeks vacation here than Thailand or the Phils when it comes to looks.  With this being said, a lot of them aren’t looking to hook up for a one night stand like they are in the aforementioned countries.

Just like all of the other counties on our site – you’ll be shocked at how easy it is to get a date from IndonesianCupid.  It’s a little different here when it comes to getting them into the sack because they’re a bit more reserved but you’ll never be lonely here.  This isn’t the place to come if you are just looking for a ton of one night stands.  Sure, there are quite a few girls on the site that will go home with you the first night I wouldn’t say it’s the majority.  Religious beliefs and the overall culture has a bit to with this but why not just go for a few dates before taking them home?  IndonesianCupid girls are a bit fast and loose relative to just meeting a girl at the local market though since they’re generally looking for a foreigner and you fit the bill.  I actually prefer when girls aren’t that easy so this can be a real treat.  Easiness score = 7/10.  This score is of course compared to other Asian countries and not to the West.

You can run out of girls to message quite fast if you aren’t in a major city with a decent population.  The girls seem to really be clustered around these bigger cities based on population and the popularity of the tourist destination.  There are usually about 1000 members online at a time here and half of them are girls.  This seems unreal if you haven’t been to Asia and tried online dating but there are just so many girls that want a foreigner here that the odds are stacked so much against us!  There are absolutely over 10k active members here so the site isn’t as small as some might think.

No brainer here.  Lots of people come to South East Asia to be cheap but this isn’t the place to save $20.  The amount of messages are limited and search features basically non existent for the free version.  I’ve always signed up for the paid version when heading to a country where I don’t know any girls yet.  The benefits are well worth the price because you can send out mass messages to lots of girls at the same time.  You can also search by distance, weight, height, religion, and tons of other criteria.  Lots of girls fill out their profile completely on Indonesian Cupid so it makes it very easy to sort to find who you’re looking for.  We highly recommend this site if you’re in the area as there is virtually no competition for them and dates come easily.  Good luck out there!

Not interested in Indonesian women?  Check out our ChinaLoveCupid Review.